There are many good reasons to come to Le Marche, not least that it is a region that has maintained its past and all the old traditions. The rhythm of life here and the age-old atmosphere of the region continue to enthral and surprise the many visitors who come to stay. Le Marche is a region of open blues sea, long white beaches and beautiful, diverse landscapes which are speckled with magnificent cities and picturesque hilltop villages. Le Marche Holiday advises and helps you to have a real experience on holiday by not sticking to the regular tourist routes but instead, immersing yourselves into the cultural heritage of this wonderful region.

Imagine the pleasure of taking sun kissed country roads as they meander across hills covered with olive trees, vineyards and sunflowers. Other routes will take you from the sea to mountains, caves and lakes and all paths seem to lead effortlessly to quaint little villages or ancient town centres with piazzas, historical buildings and museums. Along the way you will witness first-hand the wonderful ancient crafts and gastronomic traditions which have remained unchanged over the centuries. Le Marche will fire your imagination and capture your heart.

It was in central Italy that the Renaissance first took root. This great cultural explosion was not merely a school of painting, a style of sculpture or an architectural fashion, but an entirely new way of seeing the world. Remember that the Renaissance is a catch-all term covering over 200 years of human endeavour. Don’t worry if you find it difficult to follow. Lucy Honeychurch, lost in Santa Croce without a a copy of Baedeker, in E.M. Forster’s novel A Room with a View, was also thoroughly confused until “…the pernicious charm of Italy worked on her, and instead of acquiring information, she began to be happy.”

In the Dark Ages following the collapse of Rome, between the 5th and 10thC, the people of the Marche, as in the rest of central Italy, were far too busy with foreign invaders to bother much with the finer points of art or architecture. The few churches and monasteries that remain from this period tend to be in the oriental Byzantine style with eclectic touches from more barbarian cultures.

Only with the increasing wealth and stability of the Late Medieval period in the 11th and 12thC, did building fever catch hold. The Romanesque style of these years, was both the sum of these new influences and a harking back to distant memories of Roman architecture.

As the Romanesque was reaching its peak in central Italy, northern Europe was being gripped by the construction of the great Gothic cathedrals. The solid walls and dumpy round arches of Romanesque were being swept away by soaring pointed arches and flying buttresses that allowed walls to become simply frames for glittering panes of stained glass. The Gothic label was invented by Renaissance Italians as a term of abuse for a style so barbaric, they said, it could well have been created by the Goths.

For all that, it was a potent influence in central Italy and in the Marche it was to have a strong influence on many of the great civic buildings of the 12th and 13thC. Gothic architecture, too, was the stimulus for a revival in the arts of sculpture and painting; while Giotto’s great frescoes and Nicola and Giovanni Pisano’s sculptures were some of the earliest works to break free from Medieval two-dimensional formalism, they were firmly planted in the Gothic tradition. It proved a vigorous style that was to run through the Early Renaissance. Its culmination came in the 14thC with the International Gothic school whose leading exponent was an artist from the Marche, Gentile da Fabriano. 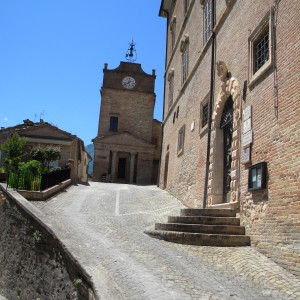 It was Giorgio Vasari who first drew together all the strands that ran through the great creative flowering in central Italy. In his Lives of the Artists, a collection of well- informed biographies of the protagonists of the Renaissance published in its final form in 1568, he characterized a period of some 200 years, from Giotto to Michelangelo, as a Rinascita, or rebirth, of art and architecture.

But it was not until the 19thC that the French word “Renaissance” was used to describe a whole period, set apart from what had come before. And it was with Jacob Burckhardt’s The Civilisation of the Renaissance in Italy, published in 1860, that Italy was identified as the progenitor of a chapter in human history that still conditions much of our perception of the modern world.

What Burckhardt saw as the key to the period was the growth of individualism – where Medieval man had been content to work in collective anonymity to the greater glory of God, his Renaissance counterpart was much more interested in his own greater glory. Fame or notoriety – it mattered little which – became the goal, and competitive talent was all. As if to wipe out the nightmare of the barbarians, poets and painters, sculptors and scholars, looked to Ancient Rome and Greece as the source of all nobility and wisdom, and paganism and Christianity uneasily shared the same bed. Humanism released thought from the strait-jacket of Medieval superstition while wealthy patronage fostered the cult of personality.

With human self-awareness came a new interest in the natural world, and artists turned to anatomy and mathematics with as much gusto as they did to the ancient world. The organisation of society, too, became a work of art, both in theory, as in Machiavelli’s writings, and in practise, as in the glittering court of Urbino.

No longer was it adequate for the ambitious to be competent in one chosen craft, for the new age called for the master of many talents, the all-round Universal Man, epitomized by that peerless genius, Leonardo da Vinci.

The cradle of this revolution was Florence; its two great sons, Dante and Giotto, were born within a year of each other in the 1260s and with them we hear the opening bars of the overture. But the curtain was not to go up on the Renaissance until a hundred years later with the entry of that great Florentine trio, Masaccio, Donatello, and Brunelleschi, in the first half of the 15thC. Although he died in his late twenties, Masaccio (1401-c.1428) managed to revolutionize art with the first controlled use of perspective in painting and the introduction of full-blown humanism in the realistic portrayal of human suffering.

Scuplture, because of the ease with which it could render realistically the three-dimensional human form, was the greatest art of the age, and Masaccio’s solid figures owe a great debt to the most celebrated of Early Renaissance sculptors, Donatello (1386-1466). Regarded by Vasari as equal to the sculptors of classical times, his incisive and emotive realism and sheer versatility have rarely been matched.

Both artists were profoundly influenced by the geometric principles of perspective laid down by Filippo Brunelleschi (1377-1446), the leading architect of his day. He is best remembered for the dome of Florence cathedral, a revolutionary feat of structural engineering, and his creative rediscovery of the all’antica vocabulary of the architecture of Ancient Rome.

During the course of the Quattrocento, as Italians refer to the 1400s, numerous artists and architects perfected the achievements of the Early Renaissance – in Urbino both Paolo Uccello and Piero della Francesca pushed forward the history of Western art with their pioneering exploration of foreshortening and perspective. In the Marche the leading architect was Francesco di Giorgio Martini, the man who masterminded the stunning military complexes for Duke Federico of Montefeltro. Other great artists working in the Marche included the Venetian-born painters Carlo Crivelli and Lorenzo Lotto, both of whom have left many examples of their work in the region.

But it was the first half of the 16thC that saw the apotheosis of the Renaissance ideal of perfect beauty and harmony with the works of Leonardo, Michelangelo and the Marche’s own Raphael who was born in Urbino

A term that art historians love to argue over, Mannerism loosely refers to Italian art between around 1520 and 1600. It was Michelangelo himself whom many regard as its creator. It is characterized by dramatic use of colour, distorted figures, violent compositions and a move towards the grotesque and outrageous.

For some it marks the triumph of style over content, a vacuous virtuosity for its own sake; for others, it is an assertive and intellectual breaking-free from the, by now, suffocating restrictions of Classical Renaissance art. Its leading central Italian exponents include the painters Rosso Fiorentino, Pontormo and Bronzino, and the sculptors Cellini and Ammannati.

Whether or not we take to this highly subjective style, its liberation from the mathematical precision of Renaissance perspective and the confines of the block of marble paved the way for the great Counter-Reformation artistic movement of the 17thC that we call the Baroque. But with the Mannerists the central Italian age of artistic glory came to an end; it is to other places, other nations, and other web sites we must turn to follow the story of Western art and architecture.