Cooking in Le Marche is deeply rooted in peasant tradition.

Here the home cook rather than the professional chef rules and even the smartest restaurants seek to produce food just like nonna, or grandmother, used to make.

The use of fresh, top quality materials assembled with the minimum of fuss is the mark of marchigiano food. But as dishes are strictly based on tradition and local produce, each local area has its distinctive cucina tipica. As with any rural diet, much use is made of food gathered from the wild; mushrooms, game, nuts, field herbs and – the area’s greatest culinary treasure – truffles are an important feature in the Marche.

Waste, too, is frowned upon, and many of the now most fashionable dishes were first developed to use up such things as stale bread or the less appealing parts of the pig.

Not surprisingly, the best food is still to be had in Marche homes rather than in restaurants. The arrival, however, of tourists in smaller towns and villages has often raised the standards in local restaurants and led to the “rediscovery” of long lost traditional dishes. The old labels ristorante, trattoria and osteria have become somewhat interchangeable in recent years; many of the smarter, and most expensive places, call themselves osterie and take pride in reinterpreting strictly local dishes with great flair.

Many restaurants also double as a pizzeria, but note that pizzas are usually only available in the evening when the wood-fired oven is lit. Generally, though, a ristorante will at least have a written menu and a broader choice of wines. In trattorie, particularly in country areas, you will often have to cope with a menu rattled off at your table by the proprietor – at your blank looks a son or daughter with some English or French knowledge will often be brought out from the back to assist.

Avoid the temptation just to order dishes whose names are familiar to you from back home – you will frequently be missing the best the house has to offer. If you are touring in summer or early autumn, look out for posters advertising the local sagra – a festival dedicated to a town’s particular speciality where you can try the food in question in every guise imaginable. We’ve put a few of the more curious sagre in Marche Voyager’s calendar of events. A word of warning – Italian law requires that you always take your receipt, or ricevuta fiscale, with you from restaurants, bars and shops. The aim is to stop sales tax fraud and plain-clothed tax inspectors do stop people outside places and can fine them if they don’t have a proper receipt.

Eating – keep an eye out for…

Official statistics claim that marchigiani eat more meat than any other Italians and it shows. In many country areas going out to a restaurant is basically an excuse to fuel up on enormous platters of charcoal-grilled meats – grigliata mista di carne. Relief, however, is on hand along the Adriatic coast with some of the peninsula’s best fish. Print out the Marche Voyager menu translator to help you order. 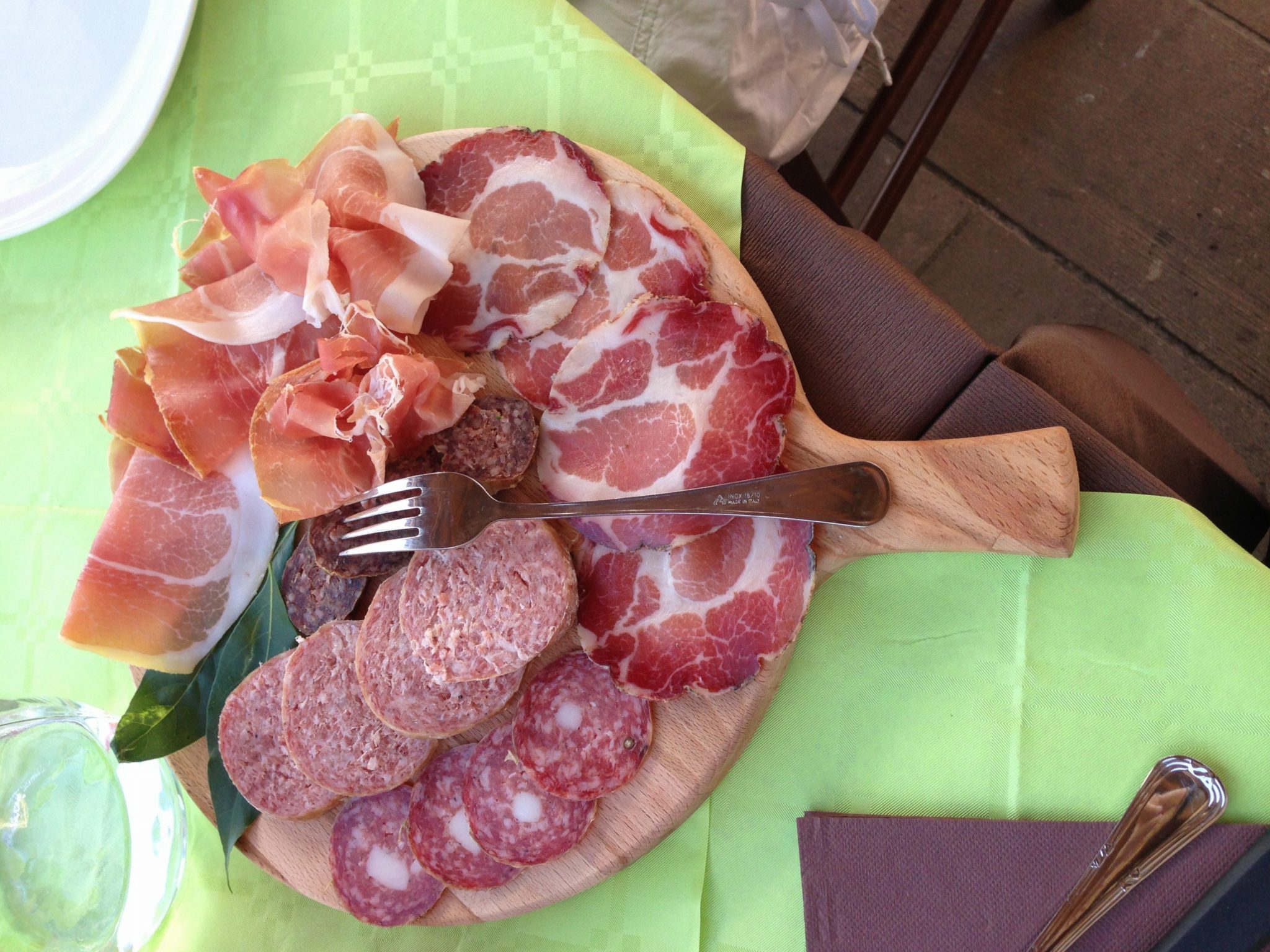 For an antipasto, mountain salt-cured ham and lonza (salt-cured fillet of pork) reign supreme. If you see it, also try ciauscolo (a soft, spreadable pork salame). The classic primo is a generous plate of tagliatelle dressed with a sugo, or meat sauce. The region’s unique pasta dish is vincisgrassi, a rich baked lasagna without the usual tomatoes. Urbino is also famous for passatelli, strands of pasta made from breadcrumbs, parmesan cheese, and egg cooked in broth. Apart from the ever-present meat grilled alle brace, on embers, delicious stuffed pigeons (piccione ripieno) and rabbit cooked with fennel (coniglio in porchetta) are a Marche speciality. In some areas, stewed snails (lumache) occasionally creep on to the menu. By the coast, particularly around Ancona, try brodetto, fish stew which must be made with 13 species of fish, no more, no less. Thin spaghetti dressed with vongole, or baby clams, is always good here as is spaghetti allo scoglio, “on the rocks” dressed with seafood.

In the northern Marche look out for piadina, a flat, unleavened bread often served with cold meats at roadside snack-bars. The sheep’s’ milk pecorino cheese is excellent here and is best eaten in the spring with young raw broad beans or fave. Look out, too, for formaggio di fossa – (a strong-flavoured cheese aged by being walled up in limestone holes in the ground).

The cultivation of oil in the Marche has very ancient origins. Olive trees were planted, together with wheat and vines, as early as the 8th Century BC. This fact has been confirmed by the discovery of large containers called ‘doli’.

Olives oil were subsequently abandoned and left to mingle with the natural vegetation until they eventually grew wild among the other forest trees and plants. During the 7th Century AD Benedictine monks arrived in the region and promoted economic recovery and agricultural production which resulted in the reclamation of the land and an increase of crops.

There are hundreds of varieties (cultivars) of olive oil both for use at the table and for dual purpose. They come in different shapes and sizes and are characterised by the differing ratio between core and pulp. The average content of oil produced varies from 18% to 27%. Their productivity depends on many factors such as climate and culture, both of which determine the rate of which the plants achieve full production. Such a large number of cultivars are due to modifications of genotype (due to bud mutations bud fixed in a vegetative way or for spontaneous cross and subsequent dissemination) or fluctuation of the varietal characteristics as a result of environmental conditions.

Pasta di Campofilone is a famous type of Italian pasta which is indigenous to Le Marche, in particular the small area known as Maccheroncini di Campofilone.

This  Pasta handmade, dried pasta consists of eggs (about 35%) and durum wheat semolina. It is first made into a very thin, golden yellow sheet before it is cut into very fine ribbons. It was originally served with meat sauce sprinkled with pecorino cheese, but since Campofilone is only about 3.5 km from the Adriatic coast, it is also eaten with fish sauces. It cooks in 1 or 2 minutes and is, in fact, perfect with any type of sauce. 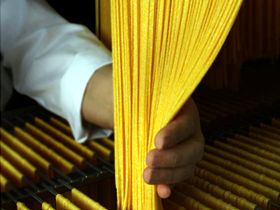 This particular pasta was first made in the Maccheroncini di Campofilone area around 1400 and was considered a delicacy. There are references to it in correspondence belonging to the Abbey of Campofilone and documents from the Council of Trento. In some ancient recipe books in the houses of noblemen it was described as being an unusual pasta which was so delicate that it melted in the mouth.

Initially it was only enjoyed on the most important feast days or as a prestigious gift when it would be wrapped in straw paper and tied up with string. As the years passed, the packaging became more elaborate and instead of straw paper a little box in finely whittled wood was used.

It is said that people would postpone important meetings and appointments so as not to miss the fair dedicated to Maccheroncini di Campofilone. Even now, thousands of tourists arrive in this town in the Piceno province to be a part of this annual festival.

Check Out our Cooking Classes!

Pecorino cheese from the Sibillini Mountains is the result of an ancient Marche dairy tradition that, even today, is still passed on and appreciated by gastronomes. It is a cheese made from sheep’s milk and has a semi-cooked texture. When it is released into the market place it is cylindrical in shape with a diameter between 14cm and 20cm, a height of between 4cm and 9cm and in weights between 800g and 2.5kg. On the outside it is a reddish gold colour, whilst the inside texture is white. Fresh pecorino shows a light sprinkling of holes internally, whilst matured pecorino is yellow and close textured and has a strong taste. 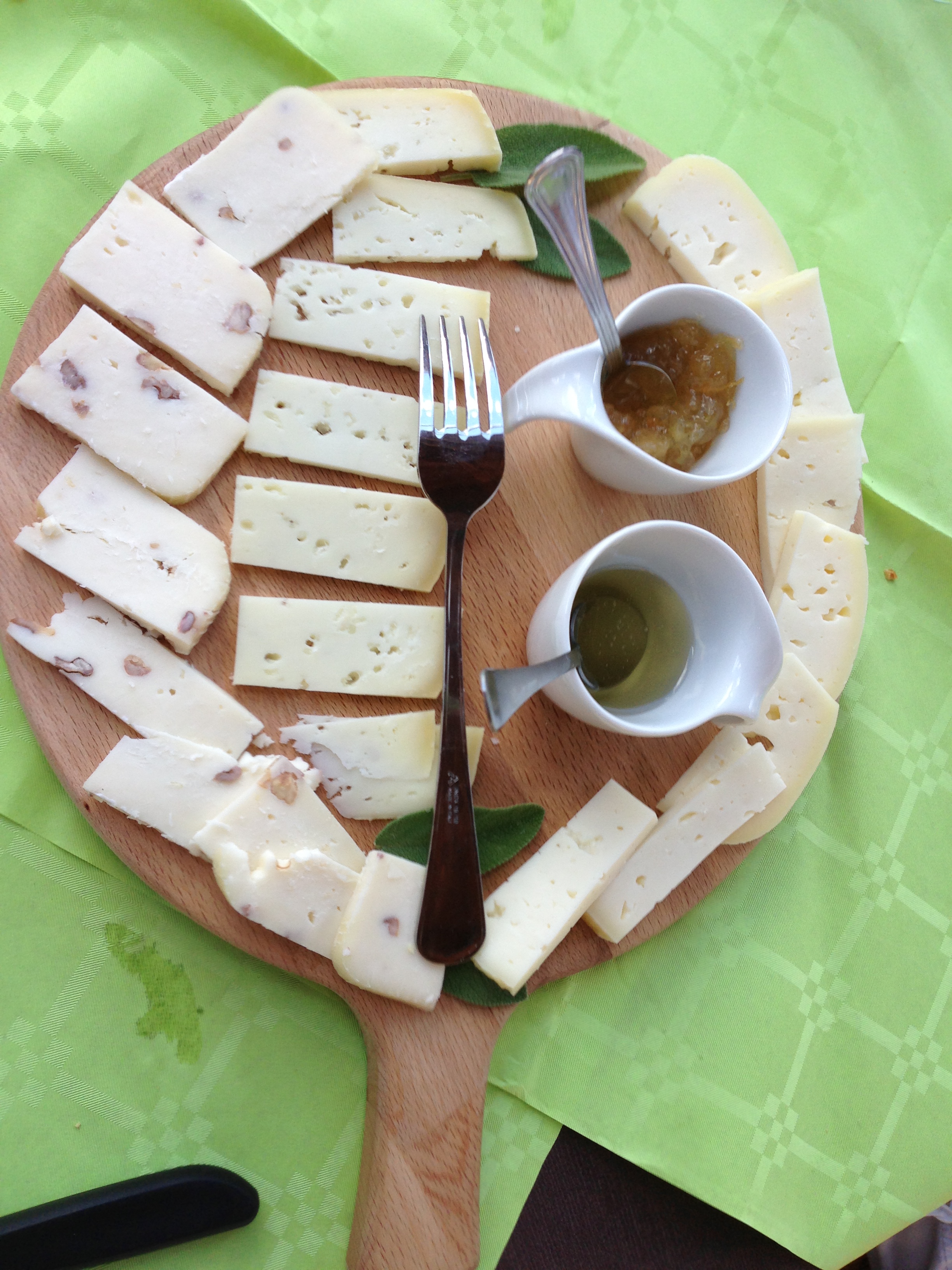 AREA OF PRODUCTION
The perimeter of the Parco Nazionale del Monti Sibillini defines the production area although it also includes part of the territory of the provinces of Ascoli Piceno and Macerata.

ACCOMPANIMENTS
Pecorino dei Monti Sibillini is a cheese that can be eaten for most occasions but it is a particularly tasty accompaniment for full-bodied red wines.

Truffles are, weight for weight, one of the most expensive foods on the planet. Luckily, however, a little goes a long way and in Le Marche you can indulge in them without pawning the family silver. Of some sixteen species of truffles found in the Marche, only two are worth killing for – the tartufo bianco or white truffle (Tuber magnatum Pico) and the tartufo nero pregiato or black truffle (Tuber melanosporum Vitt.).

The white is the finest – and the costliest; tartufi bianchi can cost well over £1,500 a kilo depending on quality and seasonal abundance. The black version comes at a more modest price. Both are a perfect antidote to the hard Marche winter as to buy them fresh you have to be here between October and the end of December for the bianchi and between December and March for the neri pregiati. In summer any fresh truffles to be found on restaurant menus will be the tartufo d’estate or summer truffle (Tuber aestivum Vitt.), a pale shadow of its noble sisters – if these are your only experience of truffles, you may wonder what all the fuss is about. 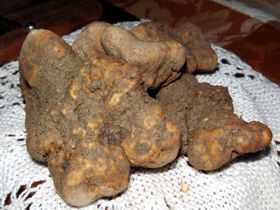 Italian truffle hunters dig up around 100 metric tonnes of truffles a year with the help of their ’57 variety’ dogs. In Le Marche, Acqualagna and Sant’Angelo in Vado are the places to head for during the truffle season. Although truffles are best eaten fresh within days of their discovery, there are plenty of products that try to preserve the experience. Best value are the small bottles of olive oil flavoured with truffles. Other good buys are truffle butter and tubes of truffle paste. The whole truffles preserved in glass jars are expensive and have had most of the stuffing knocked out of them in the process of conservation. Perhaps the oddest product are the chocolate “truffles” flavoured with real black truffle – bizarre put surprisingly good (they actually come from Norcia in neighbouring Umbria). To be avoided, unless you have a very perverse palate, are the liqueurs with a lump of truffle bobbing about inside the bottle.