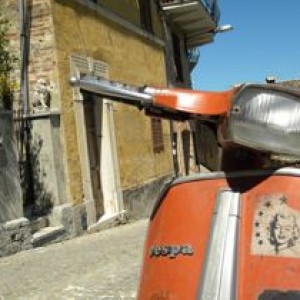 Starting from Urbino, Le Marche northernmost province, we’ll discover its ancient Duchy, the Montefeltro. A stranded hilly and mountain region, with a fascinating blend of hidden art treasures, unspoiled nature and well kept past times traditions. Travelling with a classic car you’ll have the feeling of a journey in the past and you’ll appreciate the Montefeltro even more. Away from the every day congestion, these twisting roads are taking from village to village in an ever-changing scenery. At any stop somebody will get close to the car recalling the old days when a sporty convertible was a rare sight, a memory to retain in mind forever. This is a land of motor fanatics after all.

Urbino, declared World Heritage Site by Unesco, is known to be the capital of the Italian Renaissance thanks to the Humanist Duke Federico Montefeltro and home town of Raphael the painter. Urbino attracted some of the most outstanding humanist scholars and artists of the Renaissance, who created here an exceptional urban complex of remarkable homogeneity, the influence of which carried far into the rest of Europe. Urbino represents a pinnacle of Renaissance art and architecture, harmoniously adapted to its physical site and to its medieval precursor in an exceptional manner.

Its origins are dating back to IV century b.C., when a Senons village is documented to have been built in the area, although the Romans soon took over the area. Its most important sights are the Palazzo Ducale (Duchy Palace – XV Cent.) an extraordinary example of fine renaissance architecture and sublime engineering alike. Then the church of San Francesco, the Cathedral, the Oratori, and the Albornoz Fortress and outside the city walls the Mausoleum dei Duchi (San Bernardino Church). But our suggestion is to walk in the narrow streets of this fascinating city to discover its true soul. This can’t be explained but only experienced. 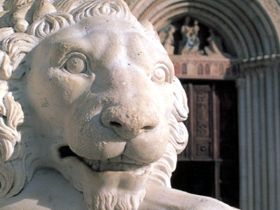 Right off Urbino we take a winding road crossing the magnificent Natural park of the Cesane on our way to the Passo del Furlo (Gorge). This astonishing road winds aside the river, at the bottom of a deep canyon, surrounded by a wild nature. You will soon discover why most of the striking images of the Mille Miglia have as a background this dramatic scenery.

We are now on our way to Urbania with its elegant Barco Ducale, hunting mansion of the Montefeltro family and off to Sant’Angelo in Vado with its preserved medieval town centre dominated by the tower of the Palazzo della Ragione (XIII cent.) and the Domus del Mito, a huge Roman patrician house boasting large mosaic works. This is the area of the Massa Trabaria rich of the valuable and delicious white truffle and therefore a stop here for a sumptuous lunch is highly recommended.

Views from the roads on this side of the Apennines keep you holding your breath to the next stop. Soon we get to Frontino, a tiny old village, and the nearby Convento of Monte Fiorentino (cloister) (XIV cent.).

Leaving the Natural park of Sasso Simone and Simoncello and its necropolis on our left, we reach Carpegna on the slope of the Mount Carpegna. This area is famous for the traditional Prosciutto di Carpegna (Parma ham) and for the local breed of beef cattle the Marchigiana… you may want to consider another tasting stop in a local trattoria.

This northernmost area of the Duchy of Urbino experienced several centuries of war from the defending family of the Montefeltro (Urbino) against the assaults the Malatesta (Rimini). Like Florence and Siena, Urbino and Rimini have fought bitterly contending year after year every single hills. That’s why most of the villages here boast mighty fortresses or castles to keep assaultants at large. The Montefeltro were able to get hold for most of the time of its territories, until the Vatican took over in 1631. 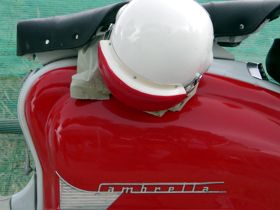 A medieval ghost town is in front of us, the ancient Castle of Pietrarubbia (XV cent.), whose inhabitants used to make charcoal for living. You can still perceive this volcanic atmosphere, so much that the TAM (artistic metal handling school) by master Arnaldo Pomodoro is based here and several works of art can be seen along the village streets.

The next stop is San Leo, grasped to its invincible peak. First striking view will be its powerful fortress built by Francesco di Giorgio Martini.

Two elegant Romanic churches, the Pieve and the Duomo, can be found in this charming and calm village. Off the peak and outside the city walls of San Leo the Convento di Sant’Igne (cloister) is another valuable sight.

In the far distance, among a see of hills, we can see the next stop: Montecerignone. As often happens in this area the nature is fascinating but harsh: gullies everywhere, inaccessible forests, frosty winters, rendered life difficult to this fiery population. Today we can easily explore this unspoiled region with a classic car, and our memories of a fascinating landscape will be remembered forever.

Montecerignone, as in the case of San Leo, sits on top of steep hill, with woods all around. Its fortress (again by Francesco di Giorgio Martini) was an outpost of the Montefeltro’s, but the village feeling is intimate and cosy. Remember in Le Marche you will never be a tourist, but a house guest.

From the Conca Valley we head toward the Foglia Valley towards Macerata Feltria. Founded by pre Hellenistic population (Pelages), today is a relaxing retreat, with thermal baths and beautiful sights, such as the Palazzo del Podestà (Mayor), the Castle and the Torre Civica (Tower) (XII Cent.) and the Pieve di San Cassiano (parish church – XI Cent.).

A short drive will get us to the bed of the river Foglia, right where it opens up, forming a lake, whose name, Lake of Sassocorvaro, belongs to the village above the lake. Sassocorvaro with its Rocca Ubaldinesca (Fortress- XV Cent.) and the scenic view on the lake, it’s well worth a visit. A few miles and we are back in Urbino, where our itinerary comes to an end.

It will take a minimum of 2-3 days to cover it, it all depends how you want to indulge yourself with all that the Montefeltro has to offer and how lo

ng you want to enjoy this winding roads on board of our classic cars. Don’t forget that you still have most of Montefeltro -let alone Le Marche- to discover. The steep ascents to the Mount Catria and Mount Nerone, the elegant dignity of the Monastery of Fonte Avellana, the walled cities along the Metauro river, the scenic Park of San Bartolo above the Adriatic shore and the romantic Rocca di Gradara with the legend of Paolo and Francesca, the most celebrated passages in the Dante Commedia.